Definition: A Jones fracture is a fracture of the base of the fifth metatarsal. More specifically it is a fracture in the fifth metatarsal that extends into or towards the intermetatarsal joint (between the 4th and 5th metatarsals). (picture). This area of the bone has a poor blood supply and is typically more difficult to heal. Jones fractures are caused by trauma or repetitive stress to the foot. Patients with high arches are at an increased risk because this foot posture places more load on the outside of the foot. Diagnosis: X-rays of the foot will identify the fracture. In cases where a fracture is not seen on x-ray an MRI can provide more detailed information.

Treatment: If the fracture is non-displaced and the bone remains in good alignment conservative treatment is a reasonable option. However, even with compliance during non-surgical treatment the fracture may not heal appropriately due to the poor blood supply to the area. The patient will be non-weightbearing in a cast or a walking boot for 6 weeks. X-rays after this period are taken to monitor bone healing. If the bone does not show signs of healing after 6 weeks surgery is then indicated.

In the case of athletes or active individuals surgical intervention is often the best option to allow quickest return to sport. A displaced fracture also requires surgery. During surgery a screw is placed within the bone to provided fixation and stabilization while the fracture heals. After surgery patients will be non-weightbearing in a walking boot for 4-6 weeks before progressing to walking in the boot for one month. X-rays are taken at 6 weeks and monthly after that until the fracture is completely healed. Physical therapy is important to help patients safely return to their sport.

Definition: The Lisfranc ligament connects the inside of the second metatarsal base to the outside of the medial cuneiform (a midfoot bone). (picture). Transverse ligaments connect the second through fifth metatarsals but not the first and second which makes the first metatarsal more likely to displace when the Lisfranc ligament is injured. The most common mechanism of this injury is when the foot is pointed down, the ball of the foot is planted, and the back of the foot twists. This can occur during field sports like football or soccer or after missing a step when descending stairs. High impact motor vehicle accidents and falling from a height are also common causes. 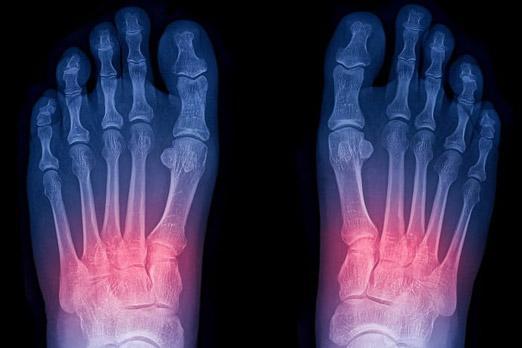 Symptoms: Patients report an acute trauma with moderate to severe pain and swelling in the midfoot. Bruising is often present and a bruise on the plantar surface (bottom) of the foot is very characteristic of a Lisfranc injury. Patients may not be able to bear weight on the injured foot or stand on their toes.

Diagnosis: On physical exam a tarsometatarsal squeeze test often elicits pain as does a pronation-abduction test. Standing, weight-bearing x-rays of the foot are important to determine if shifting or gapping between the bones in the midfoot have occurred as a result of the ligament injury. If there is a high suspicion for a Lisfranc injury but x-rays appear normal a MRI has high sensitivity and specificity for detecting such injuries.

Treatment: If there is minor injury to the midfoot ligaments and the bones remain in their normal position non-surgical treatment can be used. A patient will be placed in a cast or walking boot for ~6 weeks. Initially the patient will be non-weightbearing with gradual progression to increased weight-bearing.

In the case of fracture, dislocation of malalignment of the midfoot bones immediate surgery is important. Surgery may involve the placement of a tightrope or plates and screws. Recovery after surgery involves 6 weeks of non-weightbearing and 1 month of walking in a boot with subsequent physical therapy. It will typically take at least 4 months before a patient with any kind of tarsal-metatarsal joint complex injury can return to sport.

Office Hours
Get in touch